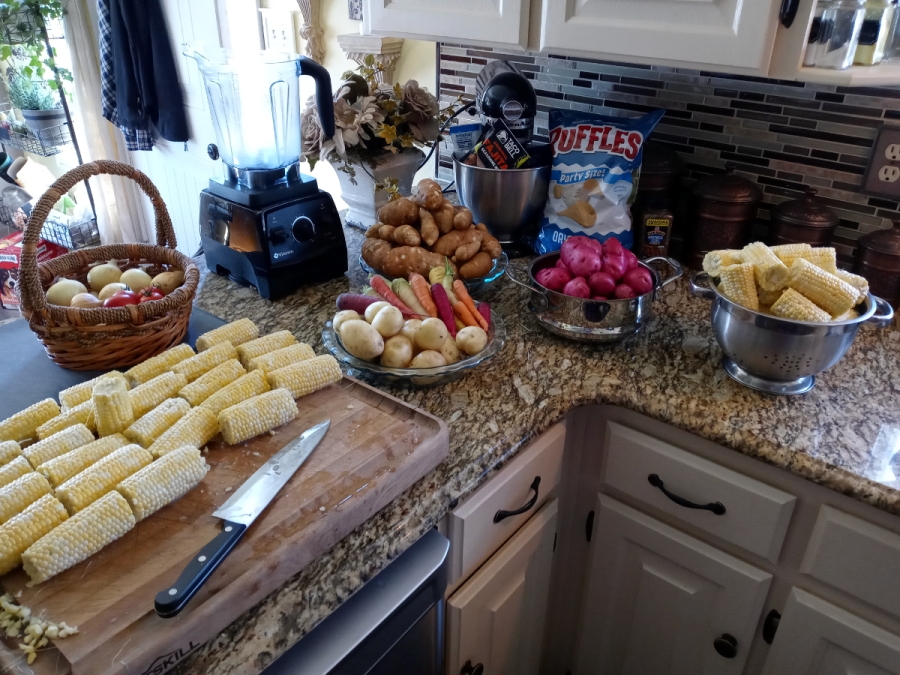 We knew it was time to harvest some of the corn because it’s been giving us all the right signals that it’s ready. Plus, we’d been eating it one or two cobs at a time all week so we had properly tested it out beforehand.

Well, mostly the hubs and my sons were eating it. I had a little bite here and there since corn is one of my worst food triggers but I took precautions and thankfully it didn’t make me sick and it was delicious!

We only took the bigger ones so there are still plenty left growing for next time. I thought it would take a lot longer than it did to pull and then shuck it all, but it went quickly and it was done in no time.

It will probably take me longer to blanch and freeze them than it did to harvest!

The potato tower was next.

It was definitely ready to come down and to be honest, we didn’t have high hopes for it because it didn’t fill out like we’d hoped but judging by how dead the leaves were getting we knew we better knock it down and see what, if anything, we could get from it before whatever potatoes were in there started to rot.

That went relatively quickly, too. A few snips of the wire and voila! Then the fun began.

At first only a few small red potatoes were visible and we all kind of let out a collective disappointed sigh. But then we dug around in the dirt and soon a few white potatoes and then a few bigger reds and then a few more of each came up as we dug in more and more…

When it was all over, we were pretty happy with the haul!

Next it was time to dig up the raised bed potatoes. They were easy enough. Just a few turns with the digging fork and up came the most beautiful russets.

We got a couple nice bucket fulls in a short amount of time.

While the boys worked on the potatoes, I pulled a few more carrots.

There are still plenty of those left still, but they should be ready about the time we finish with the corn and tomatoes.

All in all we have had a nice harvest so far this year. Our local potato farmers are apparently not expecting a good year due to the heat and drought conditions, but that’s okay. We should have plenty to get us through just from what we were able to grow ourselves. Some will go in the root cellar and the rest will go in the freezer. It looks like we will have enough meat and veggies to last about six months, just from what we’ve put up so far.

And we’re far from done! I am still putting away lots of store-bought canned and dehydrated goods, too, because you just never know.

With all the craziness in the world right now it is just so rewarding to be able to be somewhat self-sustaining. Eventually we hope to get to a point where we won’t need a store at all, if push comes to shove.