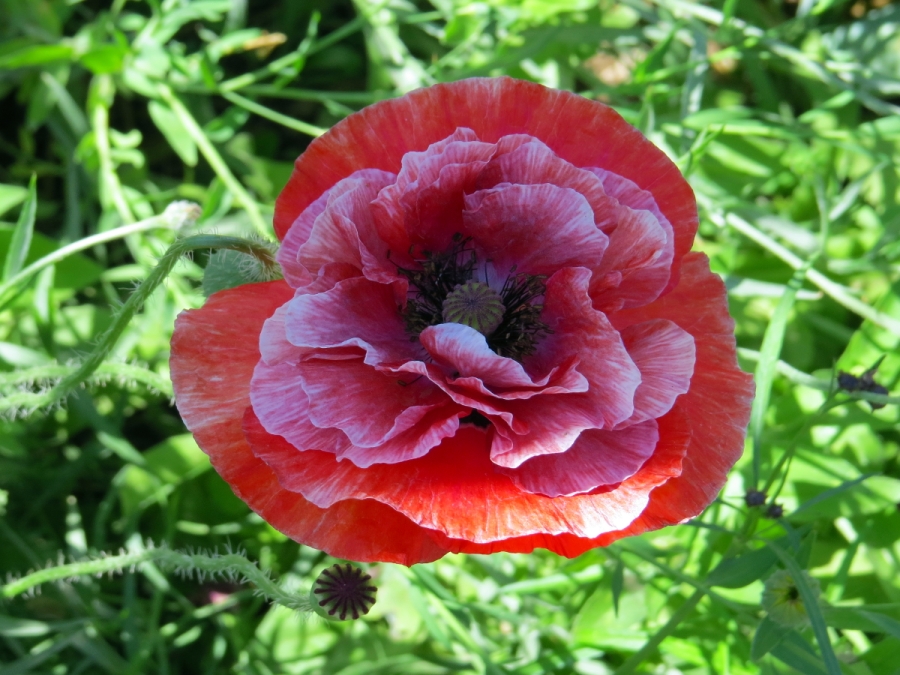 This one red poppy in my flower bed stood out to me because of how beautifully it has filled out. The other flowers are beautiful in their own right, but this one is special.

It reminded me of when I used to make paper poppies with my mom at the VFW to place on the graves of veterans every year. Growing up in a military family meant doing things like this and I always felt a sense of pride as well as sadness as we placed each one along with a flag next to the tombstones.

It also reminded me of the poppy display a few years ago at the Tower of London.

Each poppy was hand made and in all, there were over 800,000 of them placed. One for each soldier killed in WW1.

The major art installation Blood Swept Lands and Seas of Red at the Tower of London marked one hundred years since the first full day of Britain’s involvement in the First World War.

21,688 people volunteered to install the poppies. Each poppy represented a British military fatality during the war.

Afterwards, you could buy the poppies and I’ve spoken to a few people who did just that and they cherish them to this day. Some did it to honor their family members and others did it just to own a piece of history.

I often wondered where the red poppy as a symbol of honor came from so this morning I did a bit of research and learned it originated with a poem written by a soldier who was a surgeon during The Great War.

In Flanders Fields the poppies blow
Between the crosses row on row,
That mark our place; and in the sky
The larks, still bravely singing, fly
Scarce heard amid the guns below.

We are the Dead. Short days ago
We lived, felt dawn, saw sunset glow,
Loved and were loved, and now we lie
In Flanders fields.

Take up our quarrel with the foe:
To you from failing hands we throw
The torch; be yours to hold it high.
If ye break faith with us who die
We shall not sleep, though poppies grow
In Flanders fields.

He actually threw it away and another soldier fetched it from the trash and sent it in to the newspapers in England where it was eventually published.

I was moved to tears reading this and also looking at the pictures of the poppy display so lovingly made by hand.

Now, as I pass by my lovely red poppies, they take on so much more meaning and I feel a bit closer to my own ancestors who gave their lives so I could enjoy mine.

2 thoughts on “One Red Poppy”