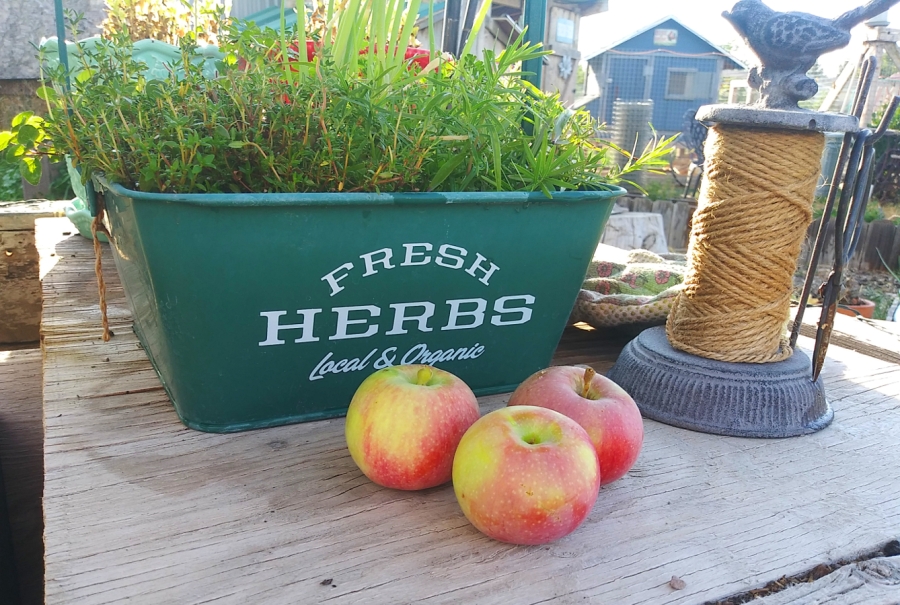 A few of the Honeycrisps fell prematurely after a strong wind came through but most of them are still hanging in there, proving their resilience and serving as a great reminder to me of my own stubborn nature which saved me from the unthinkable more than once.

I don’t know if I was born this way or if it was a learned behavior but I am a lot like Fred, who is also very, very stubborn…

These dahlias are stubborn as well and, like me, probably shouldn’t even be alive at this point after the summer we’ve had…

Yet there they are, thriving despite it all.

I talk a bit here and there about what led to my choosing this homesteading lifestyle, and I often allude to my “wonky immune system” so I’m pretty sure at least some of you know by now I have mast cell disease which causes a hyper-immune response to just about every thing imaginable.

Seriously, there are so many triggers it’s impossible to list them all but in a nutshell, I am “allergic” to most things on planet earth, and to just being a human female, basically.

I am not allergic to dogs, though, thank goodness! Unless they roll in the grass or use Axe body spray. 😄

I may well have become allergic to them, though, as my trigger list grew and my symptoms got worse as the years went by. Because I eventually started to full on anaphylax so easily it caused me to live as a virtual recluse for a couple of years until my doctors were finally able to figure out what was going on and, more importantly, what the heck to do about it.

By the time I got a diagnosis of mast cell disease in 2015, I was practically bedridden, living in an almost constant state of mast cell degranulation (slow motion anaphylaxis basically) and had very little hope for ever getting better. I could barely eat without getting sick, I was allergic to my own periods (seriously!) and every medicine I tried just made me worse.

I was allergic to them, too. 😥

I can not explain how very difficult that was. Imagine having a flu, a cold and rolling in poison ivy while being stabbed by an invisible ice pick from head to toe all at the same time and that comes somewhat close to describing what it’s like.

I had zero quality of life and no one could tell me why! I lost so many friends and even my own family members began to wonder if I was “thinking myself sick” (to put it nicely).

Life was passing me by and I was losing hope at ever getting well. I felt as though I would die and I almost welcomed death but I stubbornly clung to the thought that maybe, just maybe, things would at least level off and not get worse.

But of course things got worse because that’s the nature of this disease.

Many of us with MCAS are born sick, like I was, but it seems to hit us hardest in middle age for some reason. Some of us end up suicidal because we just can’t take it anymore, which is totally understandable. It’s hard enough being sick, but having no answers and having people you should be able to count on for support (including doctors) tell you it’s all in your head? It’s is a bit much to take.

Yet here I am, just a few short years later, functioning almost normally thanks to finding the right doctors and the right medicines. I won’t bore you with all the details, but I am now on a strict diet of organic food (a lot of which we raise ourselves) and a daily cocktail of medicines that keep my mast cells stabilized.

I can finally have a life and what a beautiful life it is, even if I’ll never be “normal”. At least I can stop and smell the roses again (or the wildflowers)…

I still have my bad days and have to avoid oh-so-many things to be safe, but the fact that I am able to function as well as I do is truly a miracle for me and I owe it all to my own learned resilience.

Well, and to modern medicine and a fair amount of prayer.

Prayer always helps when all else fails.

God does listen, you know. He also gives us strength when we’re sure we can’t go on another second. I am living proof.