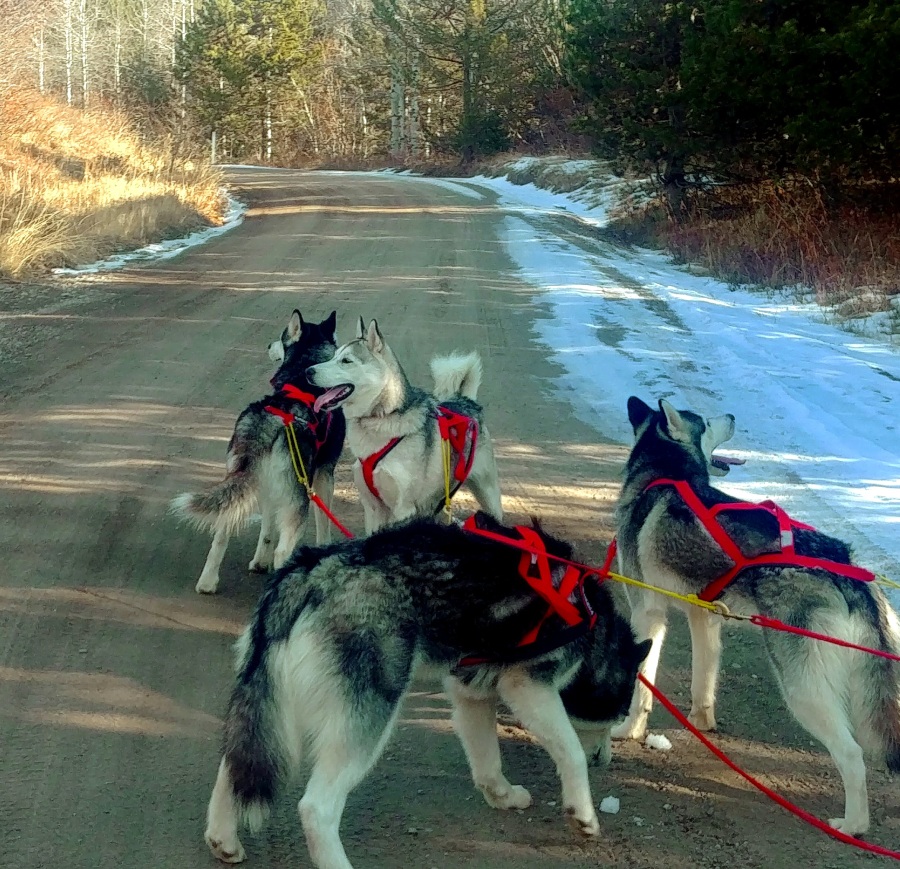 We are going to be close to 70 degrees today, but it’s just a teaser because in a few days we’ll have rain and snow and be plunged back into Siberian summer weather. There’s still enough snow way up high in the mountains to use the dog sled, but where we like to run most of it has melted now so we’re breaking out the buggy again this weekend.

The weather here will yo-yo until at least Easter and probably through Memorial Day, so I’m bracing for a lot of mud and muck over the coming weeks. Yay!

All the pups are starting to blow their winter coats out so I’m almost happy there is a wind advisory for today; it’s a perfect time to go outside and brush them out. 😄

It can get quite messy! I’d really love to get one of those coat blowers, like the Crazy Russian Hacker has for his huskies…

But right now we’re using our money for more pressing things, like food. 😣

With prices going through the roof I decided I had to try and cut costs even more where I can, because I’ve already been pretty conscientious about that. Nothing here goes to waste. At least not in the kitchen.

Last night I took some hamburger that was starting to get a bit freezer burned, mixed it with some carrots that were losing their freshness, threw in some sliced potato and rice and made the pups a casserole.

It looks a lot like what they used to serve us in the cafeteria at school!

One of the ways I thought would help our budget is finding a cheaper way to take my daily DIY compounded medicines. I had already stocked up on most of the ingredients and I had been using maple syrup as a base since it doesn’t trigger an anaphylactoid reaction but the price has skyrocketed on that.

So I decided to keep trying different capsules until I found one that works for me and luckily the bovine gelatin ones seem to be safe, so I stocked up on those before the price on them goes way, way up too.

Maybe it already has, I don’t know. 😄

But I do know it’s way cheaper than the cost of maple syrup per dose and much, much easier to take so I’m glad I did it.

It’s always a huge gamble trying something new so I hate doing it and potentially putting myself through a bad reaction unnecessarily. I have delayed anaphylaxis so it can take up to a day or two for it to start and a week for my body to calm back down again. Not only is it painful, but I lose valuable time I could be doing other things, like gardening!

My seedlings are coming up nicely, by the way. The basil especially. 😍

Did you know that you can make your own antihistamine powder? I didn’t either until I had no choice but to try it! Here’s the recipe in case you’d like to try it, too (I add quercetin and pure aspirin since those help stabilize my mast cells but quercetin is also a great antihistamine/allergy reducer and so are quail eggs, which I eat when we have them!).

I’m also making my own sunscreen since it’s impossible to find any that doesn’t set off my hyper sensitive mast cells.

I use 2 tbs of zinc oxide per one cup of “safe” lotion and I also add twenty drops of lavender, because it is “safe” for me and also works as a mosquito repellent.

Too bad it doesn’t repel those murder hornets! 😣