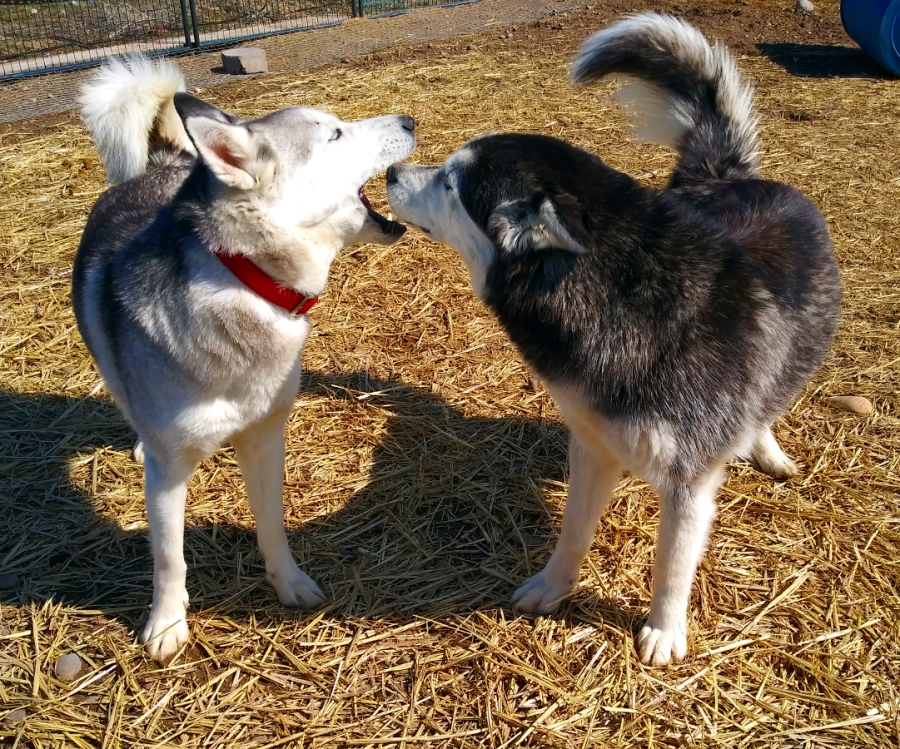 We have relatively few problems with our pack, probably because huskies are happiest when they belong to a tribe of their own kind. In fact, we found that we had less problems with them individually as we added more huskies than we ever did when we just had one or two.

When they play they do look like they are murdering each other, though…

Even the little ones look so vicious…

But they’re really not.

Once in awhile there’s a scuffle, but it’s rare. Usually over a bone or a girl in heat or if one of them catches a bird and won’t share. 😄

With that said, we have been having issues with (and I don’t know the technical term for it) fence aggression. Meaning, if there is a fence separating them they will growl and snarl and act all vicious at each other until we open the gate and then it just stops and they are back to being friends.

It wasn’t always this way but in the last year or so it has gotten really bad. They seem to enjoy it, and now everyone has joined in. Even the babies. 🙄

It makes it really hard because our pens and kennels are made up of fences!

It sounds like we’re running a backyard fight ring over here! 😮

First thing in the morning, when we open the back door and let the indoor pups run down the back stairs to do their business is the worst. A few of them will run right over to the fence line and start a huge, loud, snarling, loud, vicious sounding, LOUD, fence fight with whoever is on the other side.

It doesn’t really matter who is inside and who is out, almost all of them do it now and it is so frustrating! We don’t mind a good, happy group howl two or three times a day, but this is not happy sounds.

We’ve tried walking them out one at a time on a leash, which does work, but when there’s four or five sleeping in who wants to do that? It’s way too time consuming.

We’ve tried locking the outside dogs in the back pen only over night but that’s not fair since they can’t get to the cozy, inside kennels from there and have to sleep in their barrels (poor babies). 😔

We’ve tried positive reinforcement but it’s hard to get their attention with a treat over the loud, snarling, loud, vicious sounding, LOUD, fence fight! When we do, then it feels like we’re rewarding them with a treat for the fighting.

They get plenty of exercise, so it’s not that, either.

So we finally broke down and ordered a training system for them, otherwise known as shock collars.

We didn’t have high hopes for it because huskies have such dense, thick fur and it’s well known in the husky world that e-collars don’t usually work well on them. But it was worth a try and the ones from Pet Resolve came highly recommended so we mortgaged the farm and ordered a set.

They actually weren’t that expensive, but they weren’t cheap either.

Rather than get a collar for each pup, which would have been astronomically high, we just got three collars to start with and decided if they work, we would get three more and then three more after that and then another set of three until we had enough for the entire pack.

I don’t think we’ll need to go that far, though!

Not only do these collars work and work well, just the sound of the beep they make warning whoever is wearing it that a shock is forthcoming if they continue to be aggressive is enough to make everyone stop immediately now that they know what it is.

So all I have to do is put them on three of the indoor pups in the morning, send them down the stairs to do their business and like a miracle, it stays calm and quiet out there with zero fussing at the fences by any of them now.

Peace in the valley, at last…

Well, except one of the new neighbors has a beagle that barks and howls all freaking day! 😂

6 thoughts on “There WILL be Peace in the Valley!”