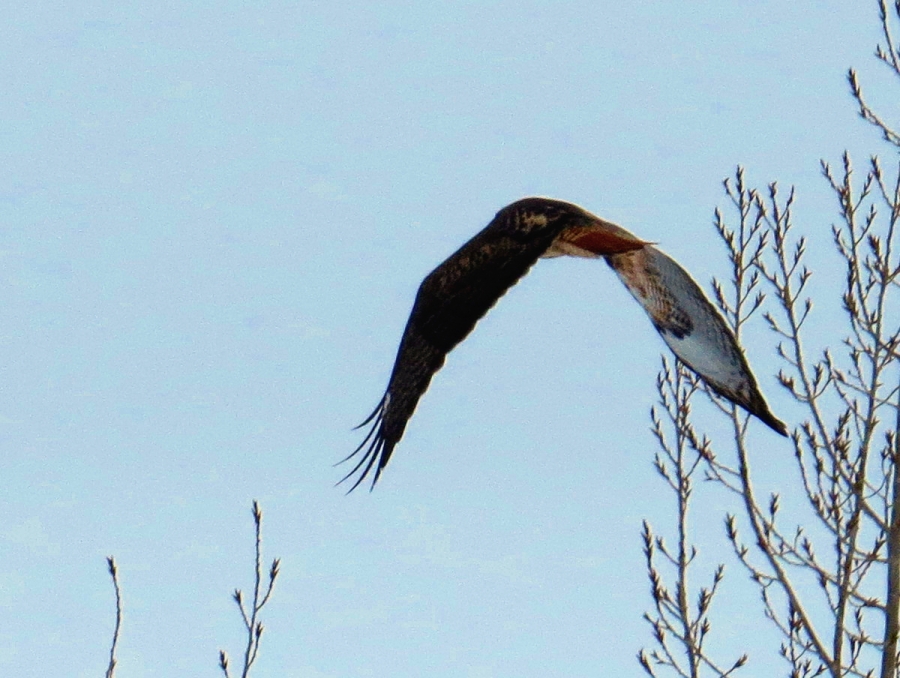 We are pretty lucky in that the outdoor pups rarely make any noise after dark. Often I’ll look outside and see them playing and running amok in the moonlight. Especially when it snows, and sometimes quite late into the night, but even then they seem to understand that they aren’t allowed to make any real noise once the sun goes down.

When they do it’s for good reason. Sometimes there’s a coyote moving through the back field or even a person out late, walking their dog or kids playing or something like that.

Last night at around 1:30am, we were awoken to sudden urgent barking and a group howl, which is very unusual and meant something or someone was awfully close. We keep a flashlight handy for these instances and it didn’t take long to find the big red tailed hawk perched up on the duck pen.

The pups were going absolutely wild over it so the hubs went out and shooed it away and calmed them all down before locking them up in the indoor kennels to keep it from happening again. The poultry were all safe inside their own indoor accommodations so if the hawk returned, he’d be sorely disappointed and wouldn’t be able to do much of anything.

I hoped he’d return today so I could practice getting some good pictures of him and I wasn’t disappointed!

I spent time at the window this morning watching the sunrise and waiting, snapping a few pictures of the trees and the magpies.

And then, suddenly, there he was! He literally just flew into the frame as I was lining up another shot.

Actually, there were two of them out there today and I was able to get some great shots of them both just as it began to snow.

I took quite a few pictures over a period of about two hours, watching them go from the quaking aspen to the pine trees and back again until they finally flew off empty handed.

I switched between the Auto and Sport mode settings on my camera a few times and then tried the custom setting I did and to be honest, the Auto one seemed to give me the best shots! 😆

It helped that they were pretty close to begin with and boy, are they big!

No wonder the pups were throwing a fit. They were probably scared that bird was going to carry one of them off in the middle of the night! 😆

6 thoughts on “A Rude Awakening”