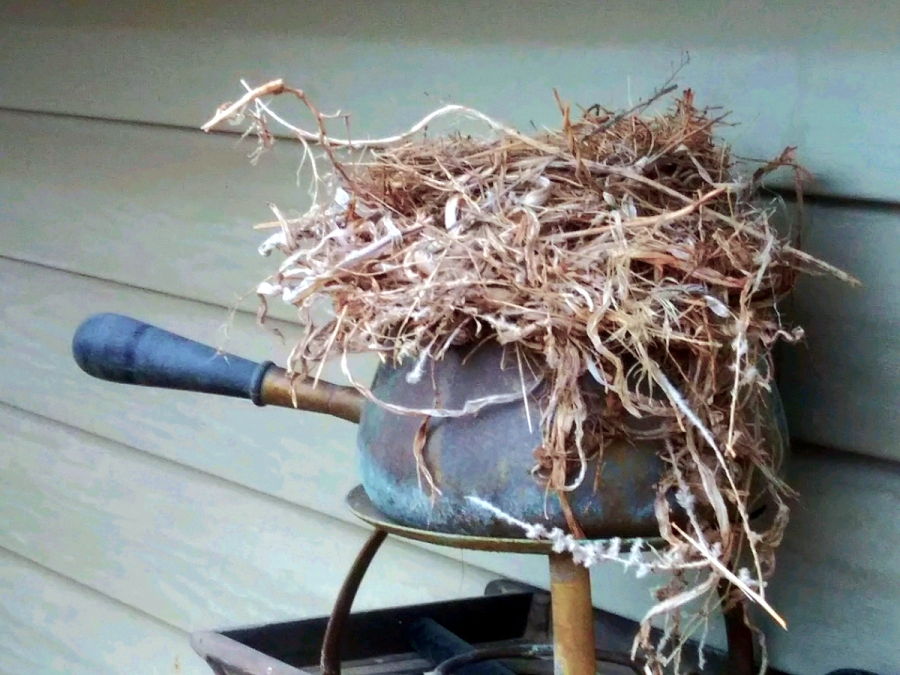 It’s another cold, blustery, rainy day here so naturally I wanted to spend the day baking some pumpkin muffins and organizing the Halloween decorations we’ve taken down. It’s a little too soon to break out the Christmas stuff, but it won’t be long now!

We have a rule that we don’t decorate for Christmas until the day after Thanksgiving. It’s not my rule, mind you, but I did agree that the day after Halloween was a wee bit too soon while the hubs thinks that a week before Christmas is the best time (are you kidding me?!) so it’s a good compromise.

So instead I’m just taking down the Halloween stuff and putting the fall stuff back up.

I spent the morning quickly doing the rounds of feeding and watering everyone and taking down bits of spider webbing that is left here and there and everywhere.

Now all I can see is the mountains of leaves left to rake up and the empty spots where ghouls and goblins and ghosts once were.

I was able to puree and freeze enough pumpkin to make at least a dozen pies and a few loaves of pumpkin bread but I was saving some I did over the weekend for pumpkin muffins today, so imagine my surprise when I went out to collect fresh eggs and found there were none!

The flock was there, but the eggs weren’t.

I checked to see if the lights were plugged in inside the coop which keep the girls laying all winter and found that someone had unplugged the extension cord and used it for the Halloween display!

Then I remembered it was me. 😆

I meant to ask the hubs to run a different cord out there but somehow in all the craziness over the weekend I forgot. The girls did lay eggs for a couple days before they finally quit altogether and of course I’d used all of the eggs in the fridge for our Sunday breakfast so I was really counting on grabbing a half dozen or so this morning to use for my muffins.

Oh well. I have no one to blame but myself, so… yeah.

The pups were pretty disappointed, too, since I tend to share the extra eggs with them. The ducks, pheasant and quail have all stopped laying now and we don’t keep lights on for them because, well, we really only want chicken eggs through the winter since those are the ones we eat the most of. The rest we put into the incubators and hatch out and we don’t want babies in the winter.

Which is why Fred will be moved soon into a pen with his girls away from the lighted coop so they don’t make babies in the snow and only our layers will be giving us eggs until spring. Barney is getting a new home altogether this weekend so we will have 8 layers and 6 baby makers in their own coops soon.

It’s so strange to run out of eggs, though! I meant to freeze some but didn’t get around to it and now I’m kind of kicking myself for that. So I’ll probably have the hubs take me over to buy some from a local egg seller we know until we get our egg factory back up and running.

For now, though, it’s out of order…