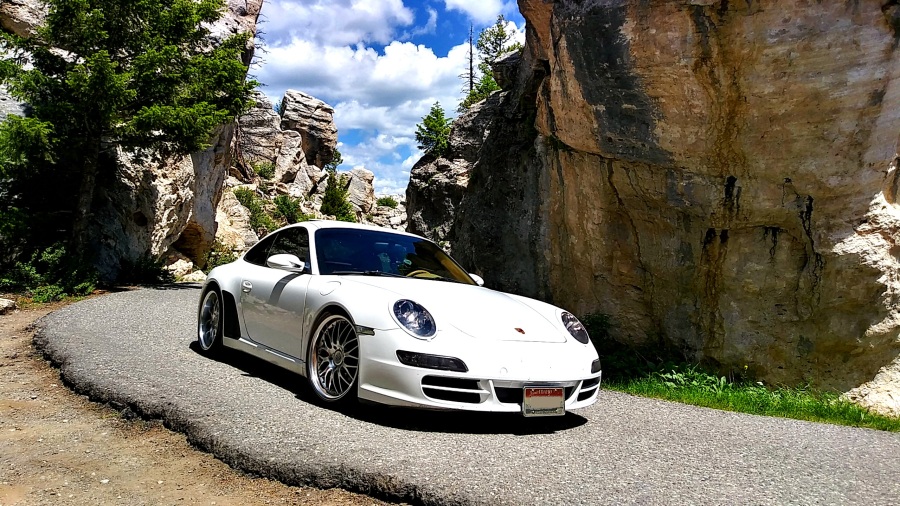 Needless to say, Gunther is a pretty popular guy around this area. We get followed by the cops, challenged to street races and have random people snap pictures of him or stop us to ask about him everywhere we go.

We also get VIP treatment wherever we go, which is funny.

One time, we took him in for a tire change and they made the technician move a highway patrol car off the rack he was using because Gunther sits so low and it was the only one they could put him on.

The cop wasn’t too happy about that. It turned out it we recognized the number on the plate – it was a neighbor that none of us liked (he’s moved away now) and also one of the cops that always followed us (probably hoping we’d do something worthy of being pulled over since we’d reported him for running an illegal water pump on his property). 😄

We don’t street race or really go overly fast in him, although we definitely can. Gunther can do zero to sixty in a few seconds because he’s been modified to go faster than your average Carrera and, best of all, he sounds like a beast.

We take tons of pictures of him like he’s one of our kids or dogs because he is sooo handsome!

Once, we went to our local cemetery and snapped a few of him while we were there and it wasn’t until later when I was going through them that I found this one with a grave of a couple whose last name was FAST on it. 😮

I am sure they would approve.

We never get tired of zooming around our “backyard” and beyond in Gunther. We have driven him all over California, Oregon, Washington, Nevada, Utah, Wyoming, Montana and of course, Idaho.

We love to take him to new places (or rather for him to take us new places!), especially if there is a curvy road involved.

This last weekend, as we were getting his flat tire fixed, we were invited to enter him in a local car show they were holding at the tire place which we’ve never done. We’ve been invited to a couple of car shows before but never were able to work out our schedules to do it, but this time we did and it was great!

Again, we got VIP treatment. They gave us a spot inside, next to a Viper race car.

There were a couple of other Porches outside in with the other cars, but ours is tricked out so he got top billing inside.

It was funny because most of the cars at this car show were ones we recognized. More than half of them were little Subarus and Nissans and Hondas owned by the street racer kids who always challenge us when they see us in town. 😂

We stayed for a couple of hours and had a great time chatting with everyone about their cars and admiring the other entries and we also met a couple of photographers, one of whom was keen on the idea of us letting them use Gunther as a prop for prom photos.

We also discussed doing tourist pics with the sled dog team this winter and they thought that was a great idea! Our dogs would love it and our team looks gorgeous with their red harnesses and red sled, so we might do that, too.

We’re still fleshing it out but it is definitely something to think about!