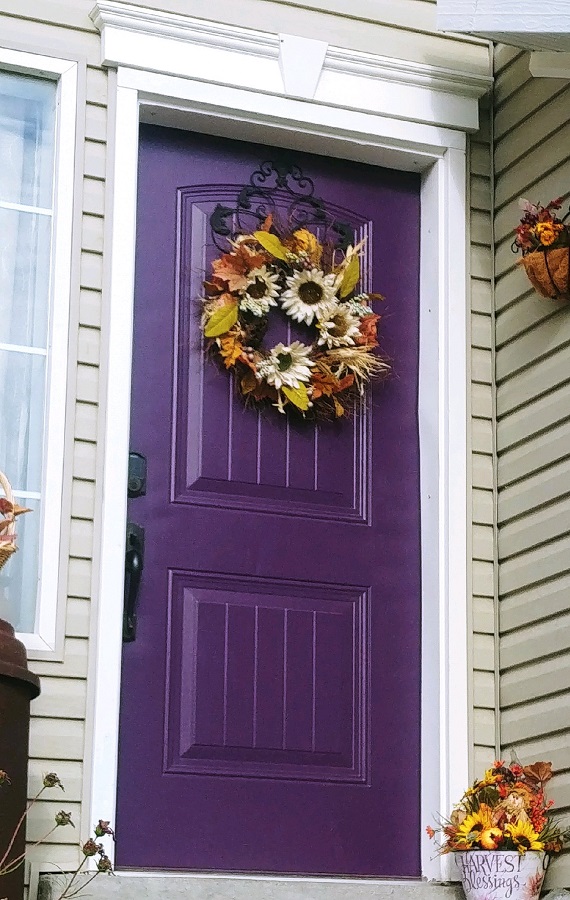 I set out this morning with a lofty goal in mind and that was to collect some sunflowers to dry out for fall decorating and also harvest some of the giant sunflower seeds.

It’s definitely time as I can see the seeds beneath the tiny blossoms in the center of the heads and I’d like to get to them before the birds do because I want to have plenty for planting next year.

Unfortunately the stalks on them are way too fat so my hand clippers are too small and the big ones are too dull at the moment so it will have to wait for the hubby to find time to sharpen them for me.

So I turned my attention to the patch of smaller sunflowers next to the chicken coop and thought I’d cut a bunch of them to hang and dry so I can use them for my fall decor inside and out, but soon found that was too risky an undertaking thanks to the millions of wasps buzzing all around them.

It was still pretty early and quite cool out but there they were, laying their claim to MY sunflowers yet again. Ugh. I really need to get one of those beekeeping suits to keep me safe from the murdering little buggers!

Since my sunflower plans were dashed I spent the morning hanging out with the chickens and admiring what’s left growing in the garden. The cucumbers are doubling in size every few days now.

The pumpkins are starting to turn orange, a sure sign we are heading into autumn.

I tried counting them all but stopped at twenty. New ones are still forming so I should have plenty for baking and for decorating with.

Next year we plan to grow some squash and zucchini next to the pumpkins and already have started working on expanding that area in anticipation.

We mowed down the pasture where the chickens and ducks free range and they’ve been enjoying being able to run around freely in that area gobbling up bugs and scratching in the dirt.

Yesterday we picked up a ton of straw and stacked it so I’ll have a few bales to use for decorating along with my corn stalks, pumpkins and sunflowers (if I can get to them that is!). We were going to take the dogs to run up at Island Park but there has been a lot of grizzly activity and a few attacks this year, so we decided to stay home and get some work done instead.

I am honestly ready for summer to end now and I especially can’t wait until the wasps and the grizzly bears both go back into hibernation!