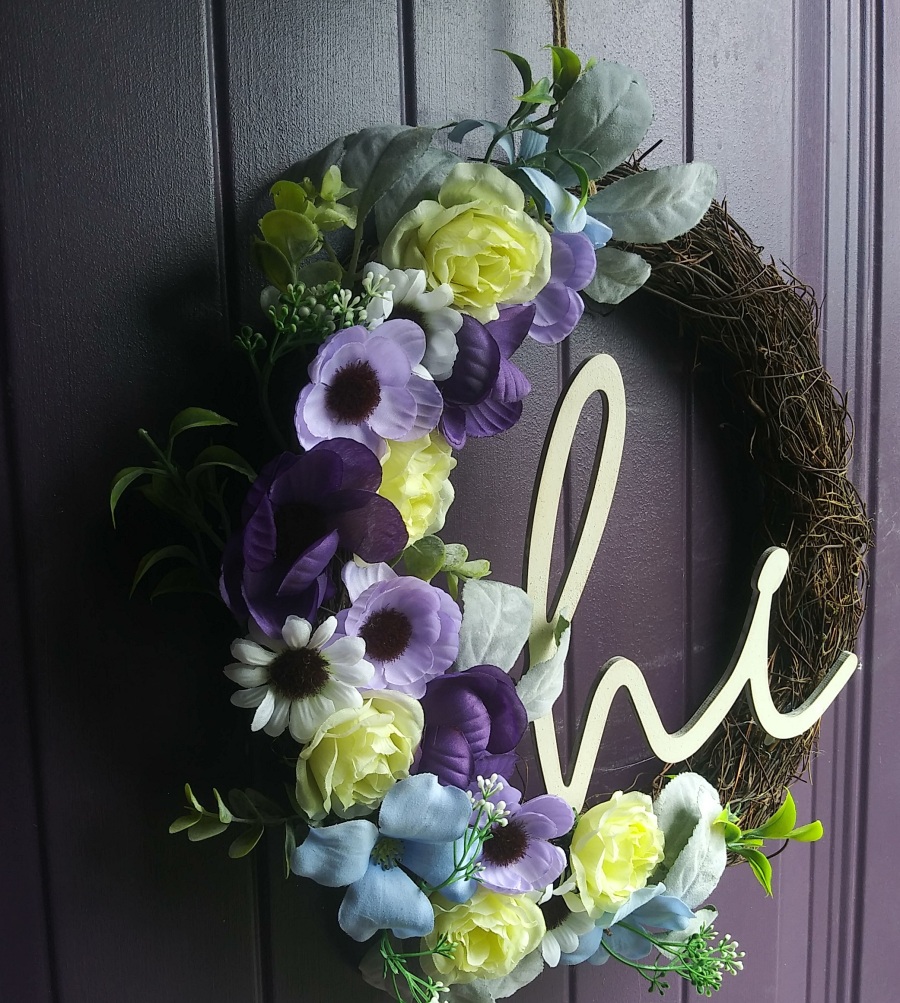 Every day seems to bring with it more problems to solve here at our little homestead. That’s not a bad thing, per se, as it keeps us on our toes and gives us unexpected challenges to tackle which is good for aging brains (or so they say heh).

The first challenge started today at the front door with my new wreath. I hated to replace the old one but it was fading badly and this one seemed perfect with its purple flowers and big, friendly “hi!” on it. It’s a nice counterbalance my “No Soliciting” and “Go Away” signs we put up for the traveling salesmen and missionaries (who all blatantly ignore our signs anyway grrr!).

I always forget how hot the space between the front door and the glass storm door gets but was rudely reminded when I opened it this morning to find the wooden “hi!” leaning badly because the glue had melted.

So I guess I’ll have to figure out a way to wire it to the wreath without making it look too obvious. Re-gluing it isn’t a good option and I can’t hang it outside the glass door without risking the wind blowing it off to the neighbor’s yard.

Don’t get me wrong. I like my neighbors and everything but I’m not running a charity shop here.

The next problem I need to find a solution for is just outside the front door.

I planted a lovely purple perennial in the bucket and it is doing really well and spills out nicely but the neighbor’s cat keeps coming over to drink out of the pond and then digs in the bucket (you can guess why that is).

I tried putting a jug of water next to it but that didn’t stop him so guess I’m going to have to put some river rock up in there to cover the dirt and hope he gets the hint.

The next problem is more a matter of logistics but it’s a challenge nonetheless. We found this chicken coop on Craigslist for $200 and couldn’t pass it up as it came with four laying hens and all the supplies (a bag of feed, feeders and heat lamp). We have been wanting to add more laying boxes before the new flock is old enough to need them so this is a great solution…

Except we can’t decide where to put it. So it’s been sitting on the trailer waiting for us to come up with an answer for a week now. I want it over by the lilacs with its own pen but the hubby wants it in the pasture where he can build a tunnel to connect with the existing coop and pen.

If I get my way, we can keep both of the roosters we have in the new flock and give each of them their own harem. If we do it his way, one of the roosters will have to go and we’ll just have one for the flock which can compromise fertile egg production. 🤨

Two roosters would be better for selling more chicks but would also create a lot of chaos, so we’ll probably go with his solution. We may find a way to separate one rooster out with enough hens to just make babies and keep the other girls just for laying unfertilized eggs for eating and selling.

My final problem of the day is these nasturtiums I planted as a companion to the veggie beds. I know the heat is doing a number on them; we lost quite a few already (which makes the asparagus beds on either side of the greenhouse uneven). 😥

But that’s not the worst part. The ones that are flowering are getting decimated by the grasshoppers now! So I need a “final solution” (wink wink) to deal with them. 😏

I found a few ideas here that I may try.

The boric acid definitely seems to be working on the wasp population and I have plenty of it, but I do worry because the neighborhood cats and dogs like our yard and I don’t want to risk getting them sick so I think I’ll try the other things first.

Well except the frogs. 😆